'cause we're gonna be all right


Ack. So I'm a bad blogger. Maybe the heat's gotten to me. Or perhaps I'm just lazy.


I feel sometimes when I'm starting to write that I've got something itching right under my skin, trying to get out, and it's hard to actually figure out what that itch means. Some days, a lot of days, I don't even try.

In any case, thoughts about things.

1. Around the PA area, two unrelated but parallel events: The NCAA handed down sanctions to Penn State and Msgnr. William Lynn was convicted of child endangerment and sentenced to three to six years in prison. People in power, covering their asses and harming others in the meantime.
I've no stake in the Penn State part, except that I wonder how much this will affect the community at large, as this article points out.
As for Monsignor Lynn, well. Every time I try to write, or even think about the abuse cases in the Church, it comes out something like this: aofujasjdakjdhfajsdhRAGE. I became Catholic in part because of the social teachings of the Church: the preferential option for the poor, the belief in human dignity and the common good. I believe in those things, strongly. And between this and the Vatican's attack on the nuns, my hope just starts to dwindle.
Sigh.

2.On the shootings in Colorado:
It's about Guns, Not About Satan

Sort of related, but not really: my friend Logan wrote a book called Reborn on the Fourth of July, a discussion about pacifism, just war, and the military. (I haven't read it yet, but I know Logan, and it should be good.)

3. And because the world is depressing, and I have too much on my mind, have a cat: 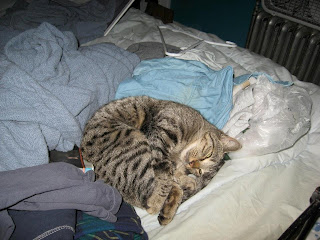 (Note that she is sleeping on top of my copy of The Norton Anthology of American Literature. Lit cat!)
Posted by sarah at 2:21 PM

sarah
Philadelphia, PA
29. Northeasterner. A little whimsical in the brainpan.