I will not rest until this place is full of sunlight

First off: I wrote something here.

Second: If you're coming over from the Slacktiverse site, feel free to poke around!

I've also written about Camden here and here. My friend Andrea, who runs the Camden Center for Transformation, blogs here. My friends Chris and Cassie also have blogs.

Pictures. To start, a photo of the community I was with, the Camden Houses. It's changed over time, people moving in and out, but some of them are still there.
From left to right: (top row) Logan, Andrea, Jeremy, Chris, Timothy. (bottom row) Tracy, Melissa, me, Cassie, Cheryl, Sherine. We have two missing, Kaitlin and Amber. 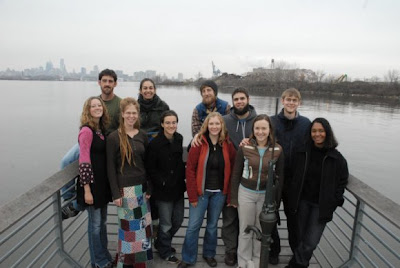 We're standing on a pier overlooking the Delaware River. You can see the Philly skyline on the left and a scrap metal yard (in Camden) on the right.

The Camden House community started when I was a freshman in college (02-03), when Chris and Andrea, who were seniors then, heard Father Michael Doyle speak. Chris went up to him and said, hey, we're thinking about starting a community house, and Father Michael said, I have the perfect place for you. I'll make you a copy of the keys and you can have the house rent-free if you work in the community.

The house had been uninhabited for years, so Chris, Andrea, Melissa and Chris's friend Jeremy (not the Jeremy in the picture), who made up the founding members, invited people down to help them rehab it. We stripped paneling, painted, did construction.
They moved into the house in late '03. Since then, Chris and Cassie have bought a house in the neighborhood and so has Andrea. There are some people also still living in the Sacred Heart house, which we called the Blueberry because (surprise, surprise) it's painted blue.

This is part of Ferry Avenue, which is one of the main cross-streets in Waterfront South. Back in 2008, when I took this picture, it was a string of abandoned houses. Since then, I believe, this part of the street has been rehabbed by Heart of Camden. This is pretty typical, though, for the city. 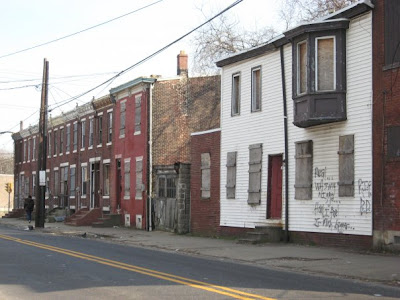 This is Sacred Heart. Waterfront South is fairly small, and Sacred Heart is a bit of a landmark in the neighborhood. 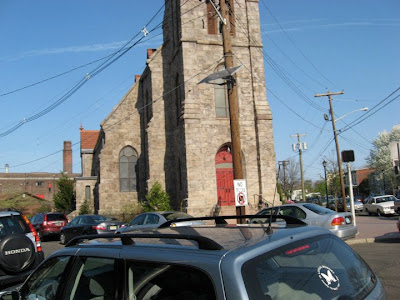 The statue of Jesus outside of Sacred Heart. 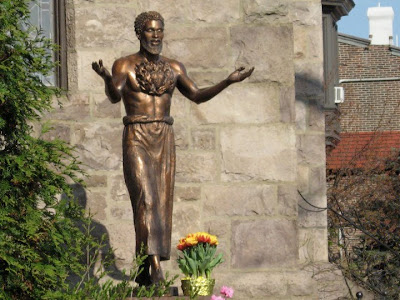 This is the greenhouse, with one of the neighborhood kids in front. There's a small garden on the side of the greenhouse, and the larger community garden is down the street in Liney Ditch Park. 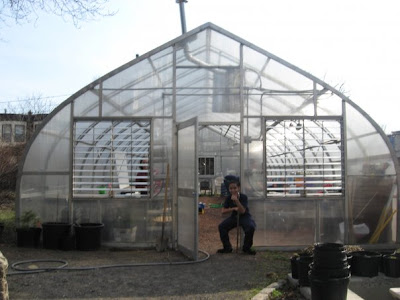 Some of the Sacred Heart School kids. Andrea has set up a Junior Farmers program, where neighborhood kids can intern with her and learn how to garden. You can also sorta see the bicycle-powered hose. That's right; someone rides the bike--it's stationary--and it powers the water. One of the summer interns at the Camden Houses set it up a few years ago along with a rainwater-catchment system. 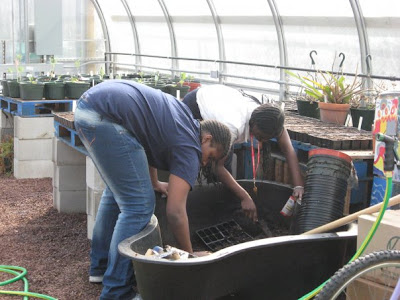 One of the neighborhood beautification projects is  painting on abandoned houses. There's a lot of poetry that gets painted on boarded-up windows and doors. Here's Neruda, with the last line of "Every Day You Play" (which is, in my opinion, one of the best love poems ever). 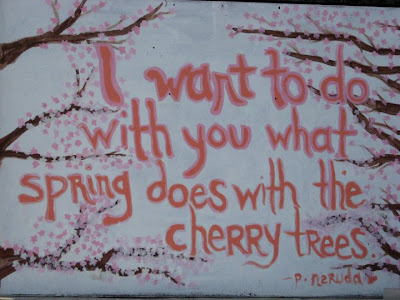 And part of Sonia Sanchez's "Ballad," along with the recurring unofficial slogan of the people who paint these: "Art will save us." 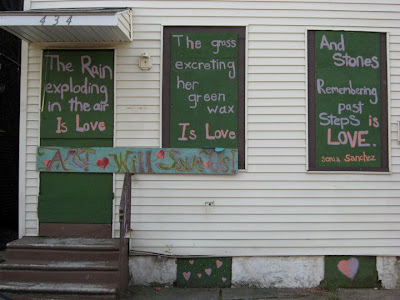 Email ThisBlogThis!Share to TwitterShare to FacebookShare to Pinterest
Labels: camden, lots of pictures

sarah
Philadelphia, PA
29. Northeasterner. A little whimsical in the brainpan.